Posted on October 31, 2014 by The Feminist Library

In her latest work Unspeakable Things Laurie Penny does gutsy, messy feminism. Bodily fluids abound in this book: snot, semen, vomit… because Penny is sick, sick to the stomach of bland and gutless feminism. Unspeakable Things is a call to arms and Penny makes no bones about this. Who cares about getting women into the board room? Never mind the Sheryl Sandbergs or the sassy women who want it all, Penny’s been in the trenches and it’s a time of austerity: this is her story and that of her generation. Why are we so lost and fucked up? she asks. 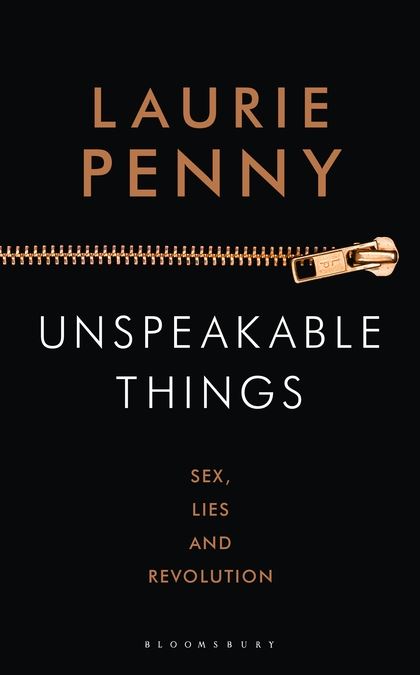 Appropriately, Penny begins with the foremost site of resistance: her own body. In recalling her own eating disorder Penny observes that ‘of all the female sins hunger is the least forgivable; hunger for anything, for food, sex, power, education, even love.’ For Penny, as for many younger feminists, women and girls are not the only victims of patriarchal society stating that ‘gender is a strait jacket for the human soul.’ Men also suffer as a result of sexism and should play an important role in changing attitudes to gender.

The discussion then moves on to the status of women in cyberspace, a place Penny knows well: it was online that she learnt to be a writer and to make her voice heard. All is not rosy for women online despite its promises of liberation. Harking back to Germaine Greer’s famous indictment ‘Women have very little idea of how much men hate them’, the internet, Penny reminds us, has shown women how much men do really hate them. Outspoken women online are constant targets of abuse, a testament to this hatred.

Ending her polemic with a discussion on love, Penny remarks that women need to stop defining themselves by love or the lack of it. The dating and mating ritual is one of the most repressive with regards to gender, just ask any woman who has been on Tinder. With her short hair and big boots Penny knows she’s not going to get as many kisses: she doesn’t fit the mould, and with her loud opinions, nor does she play by the rules. Capitalism has captured love: it is a commodity, a prize to be won. And we police ourselves, even at the cost of our own personhood, to become lovable.

Unspeakable Things is, without a doubt, an important feminist book for our times. Penny writes about what she knows and how she lives, encapsulating the experience and feelings of many young women and men, who will recognise and empathise with her stories. Her writing is not the most elegant and her arguments don’t always flow, but the points she makes go straight to the nitty-gritty of contemporary gender repression. Penny doesn’t know the answers to the problems constrictive gender roles pose but she does know ‘we’ve got to stop letting stale old men define our dreams’. It’s time to rewrite our own stories and live the lives we truly want.

Reviewed by Lottie and Cristina