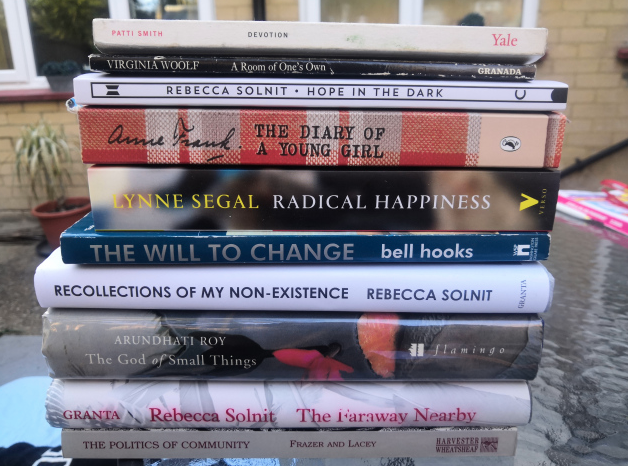 This month Madga, the Library’s fundraising coordinator recommends some inspiring reads. (Originally posted on her blog Angels and Witches.)
Magda said: “I found these books incredibly helpful in this time of corona virus. I do hope that it goes some way to helping others find some light in these dark and strange times too.”

1.   The Faraway Nearby by Rebecca Solnit – I read this in the early days of this crisis and I found incredibly enlightening when I needed some light in my life. The story of a very painful period in Solnit’s life is intertwined with fairytales, creating a dreamy landscape of surviving while discovering key truths of life through adversity. Hope can come from unlikely places.

2.   A Room of One’s Own by Virginia Woolf – arguably. One of the responses that I received when I posted about this on my blog was that the person writing it wished they weren’t stuck in their room right now. And I can totally understand. It’s a testing time for us all. But another way to look at it is that we have come a long way, and this is a time (for those of us who do have rooms of our own) when we can be extra creative.

3.   Hope in the Dark by Rebecca Solnit – a book that fell into my lap, accidentally, while I was in the middle of reading the other title by her. I thought I must read next. If there was ever an ironically perfect time to read this book, it is now. This book is built on the premise that: “Hope locates itself in the premises that we don’t know what will happen and that in the spaciousness of uncertainty is room to act.” And it builds up a (pretty convincing, I think) picture of collective hope through action.

4.   Radical Happiness: Moments of Collective Joy by Lynne Segal – I have seen this book in the Feminist Library bookshop for some time, but tended to, somewhat reluctantly, ignore it. I have a reading list that is long enough already, I thought, and so it was always a ‘nice to have’ rather than a must-read before. Until now. Now, suddenly, it seems like the perfect time. I have read a few other articles recently that spell out the same message: that it is through human connection that we find happiness, rather than through capitalist individualistic gratification. But the message has never been more crucial, as we are seeing the capitalist system crumble right in front of our eyes in the face of a global health crisis.

5.   Recollections of My Non-existence by Rebecca Solnit –  Solnit uses her experiences of life’s challenges to create a story of finding hope through a time of difficulty. It is also a story of her early days trying to make it as a woman writer in a man’s world, which makes it perhaps the most explicitly feminist one of her titles recommended here. Yes, a lot of Solnit, I know! One might say that I’ve become obsessed, but I honestly think that she’s the perfect writer for today. I’m not even trying to hide it.

6.   Just Kids by Patti Smith – a story of youth, of dreams, of naivete, but also of survival and, ultimately, making it. A memoir of her early days, when she had no money and no name that anyone recognised. It might be a personal story, but it’s one of making it against all odds, triumphing as a poor woman in a man’s world. Smith’s writing is timeless, poetic and it speaks to me like few others do.

7.  Still I Rise by Maya Angelou – or literally anything by her! The power of both her writing and her conviction is as inspirational as they come. There are few voices as powerful as Maya Angelou. Also recommend listening to On the Pulse of Morning – a poem she wrote for the inauguration for president Clinton – full of hope, but also brave words of both call to action and warning. “You, created only a little lower than / The angels, have crouched too long in / The bruising darkness / Have lain too long / Facedown in ignorance.”

8. The Diary of a Young Girl by Anne Frank – despite the horror of the circumstances in which it was written, and the knowledge of Anne’s tragic end, the young author still manages to keep the message of hope throughout: “I still believe, in spite of everything, that people are really good at heart.” It is a story of the incredible resilience of the human spirit through adversity. And a very young spirit at that. It forces us to ask ourselves: who are we to despair if this young Jewish girl in hiding in Nazi-occupied Holland managed to stay hopeful?